Board hears from FFA students 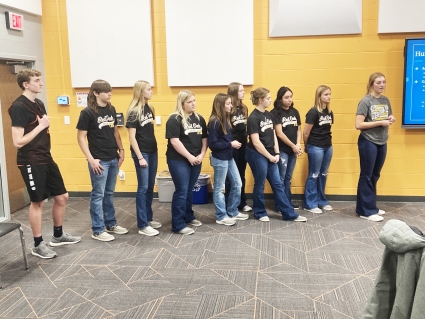 The Red Oak School Board met in regular session Nov. 28.
The board started the meeting with an update from members of the Red Oak FFA Chapter, who attended the National FFA Convention in Indianapolis, Ind., Oct. 26-29. FFA members took tours at Hummel Livestock, Fair Oaks Farms, and the Ozark Fishery.
FFA member Lainey DeVries said Hummel Livestock raised exotic cats, and marketed the cats online.
“The cats can range in price from $1,000 to $30,000, and in fact, they even sold a couple of the cats to Justin Bieber,” DeVreis said. “They range in size from the size of a dog to the size of a normal house cat.”
Another stop was Ozark Fisheries. Conor Britten said the fisheries produce koi, goldfish, crawdads, and tadpoles.
“At the facility we visited, they had over 200 ponds, about an acre in size each, and there was a lot of hands-on experience. You could reach into the tanks and try and catch fish, or try to catch crawdads,” commented Britten.
Roughly 67,000 FFA students attended the conference. Superintendent Ron Lorenz asked the students who attended last year if it was a new experience. Cloie Bruce said it was.
“We went on a lot of different tours. We went to Ozark Fisheries last year, but we didn’t go to Hummel Livestock. There are always new keynote speakers at the convention, and I thought it was a lot different. There’s always sessions, career fairs, and shopping, but a lot of the extra stuff that we did, like the tours, were fun and different experiences,” Bruce said.
Board member Roger Carlson asked if they thought more students would be interested in enrolling in FFA next year. Bruce felt there would be.
“My ag business class met with the middle school classes last week, and we showed them a video and talked about our experiences and how to join, and we had four students sign up that day,” stated Bruce.
The board then discussed approval of a School Budget Review Committee application for open enrollment in the current year, that were not included in the certified enrollment in the prior year in the amount of $144,540. Lorenz said the state allowed districts to seek additional spending authority for kids that moved into the district after the Oct. 1 child count date and open enrolled to another district.
“Since those kids aren’t counted, they don’t generate any funding. We are allowed to do this because we are required to pay tuition to the receiving district,” explained Lorenz. “By requesting the supplemental amount, we’re asking for an increase in spending authority to pay the open enrollment and compensate for the unfunded expenditures.”
The board approved the SCRC application.
The board also approved an SBRC application for limited English proficient students beyond five years.
“The kids are funded for up to five years but if the kids aren’t yet profficient, we are required to continue serving them, so districts can petition the SBRC to cover the excess costs, in the amount of $15,567,” Lorenz said.
Also up for discussion was a local government risk pool natural gas program participation agreement, in the amount of $100,304. Lorenz advised the board that the district has participated in the program for the last couple of years, and has been a positive thing for the district.
“It allows us to contract our natural gas for the entire year with a third party vendor, so all the risks that are associated with market volitility are put on them. We have a fixed cost which gives us greater budget certainty and peace of mind, and it’s been really successful for us,” Advised Lorenz.
In the past, the agreement was usually renewed in the spring, after the winter has passed, but this year, the renewal was being moved up.
“There have been things going on globally, and we are being allowed to lock in prices earlier. There’s a huge demand overseas; natural gas prices are skyrocketing. The price is down now, but they’re anticipating it will go up, so we’re taking the opportunity to lock in a price now,” Lorenz commented. “It is higher than what we’ve paid in the past, last year we paid just under $60,000 for all of our natural gas, but the $100,000 that we’re currently asking for is probably the best deal we’re going to get. The commodity brokers are pretty certain that amount is going to go up even further.
While the cost was higher, Lorenz said having budget certainty and not dealing with fluctuations was the biggest benefit.
The board approved the agreement as presented.
In other business, the board:
• Approved the resignations of Heather Johnson and Brittney Green as paraproffesionals at the junior./senior high school, effective Nov. 25.
• Approved the resignation of Colin Bruce as senior high school assistant wrestling coach, effective immediately.
• Approved the resignation of
Anthony Jones as Inman dean of students and junior high head football coach, effective at the end of the scool year.
• Accepted the application of Dana Ramirez as junior/senior high school girls assistant basketball coach for the 2022-23 school year.
• Approved the hire of Felisha Wingfield as junior/senior high school building secretary, effective the week of Dec. 5.
• Approved a fourth grade field trip to the Rose Theater on Feb. 3.
• Approved School Beyond School to travel to the Durham Museum on Dec. 10.
• Approved special education agreements with East Mills for the 2022-23 school year.
• Selected Bret Blackman as board president and Jackie DeVries as board vice president for the FY 2022-23 Board of Directors.
• Moved the regular school board meeting from the second and fourth Monday to the third Wednesday of each month, beginning Jan. 18, and reduced the number of meetings from two to one. The change in meeting dates and frequency will be reviewed in April.