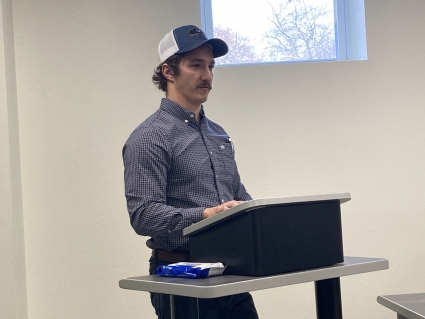 The Montgomery County Board of Supervisors received the latest update on the status of the Summit Carbon Pipeline project at the Nov. 15 meeting.
The supervisors heard from Riley Gibson, representing Turnkey Logistics. The last update on the project was received on Aug 9. Gibson updated the supervisors on the current easement miles acquired for the project.
“In August, we were at 19% for the county. As it sits Nov. 9, our easement miles acquired have increased to 61.65%, so we’re pretty excited about that. We’ve made some pretty good progress on that end, and are still expecting construction to start around the summer of 2023 and be operational in 2024,” Gibson said.  Of the roughly 18 mile project, we have 11.3 miles acquired as of Nov. 9, which is a big bump from August, so hopefully that trend continues.”
According to Gibson, they had filed paperwork with the Iowa Utilities Board, and were hoping to have a decision on their permit from the IUB around the early summer of 2023. They have submitted permits throughout the state in regards to utility crossings.
“For Montgomery County, we have a utility crossings packet that is under review right now. Whenever that’s done, we’d like to sit down with county engineer Karen Albert, zoning administrator Barry Byers, and whoever else would like to be involved and look over the packet and discuss some of the construction methods we’re going to be using for those crossings,” commented Gibson.
Gibson shared some of the safety precautions they were planning should the project be approved.
“Summit is required to x-ray or sonar test 10 percent of the welds on the pipeline. Summit is committed to doing an x-ray on every weld of the line. Also, before the line goes in the ground, it is hydrostatically tested to 125% of the max PSI of the line, and will hold that pressure for a certain period of time to determine its structural integrity,” explained Gibson. “We’ll also have staff stationed throughout the project scope area to work with first responders and emergency management staff. Staff will also monitor the pipeline 24 hours a day.”
Supervisor Randy Cooper asked if the county set an ordinance for setbacks for the pipeline different than what Summit had planned, if Summit would fight. Gibson said he wasn’t versed in those legalities, but said setbacks were often negotiated with the landowners themselves, through easements.
Supervisor Charla Schmid asked, if there were a leak, if the carbon gas would have a odor that provided a warning, such as the scent added to warn of a natural gas leak. Gibson said the carbon gas would have no odor.
“At the end of the day, it’s just carbon gas, so there has never been any additive added to carbon gas, such as scent or color, to my knowledge,” commented Gibson.
Schmid also asked if there were other carbon pipelines in other locations already in use. Gibson confirmed there were over 2,000 miles of pipeline which included carbon gas use.
“Of those 2,000 miles, some of those pipelines may be used for different purposes; ours will be used for pure carbon gas, but there are lines running through Mississippi, Louisiana, and Texas. Our main focus is to lower the carbon scores for ethanol plants and push it up the line to store underground. But this is a technology that is already in use, and we’re not inventing the wheel by any means,” advised Gibson.
Gibson also shared that some of the main line valve locations had been adjusted from maps distributed in August. Gibson said reconfiguring was required after conducting land surveys.
The permit for the pipeline project has yet to be approved by the IUB. No further discussion took place at the supervisors meeting.
The supervisors also discussed a request from the Iowa State Association of Counties for a soil compaction study, with a request for a $600 contribution from the county to buy into the study. After discussion, the supervisors declined to join the study.