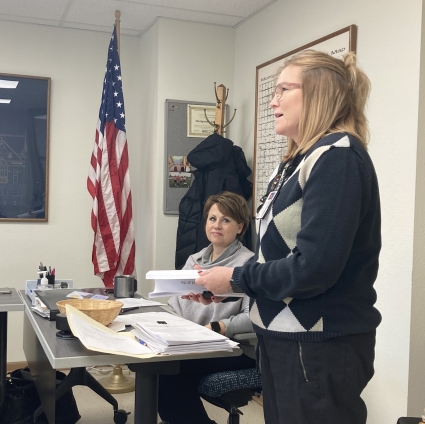 The Montgomery County Board of Supervisors finalized results of the 2022 midterm elections at a canvass Nov. 15.
Election clerk Elizabeth Peterson said nearly half of registered voters in Montgomery County cast ballots, only slightly lower than voter turnout in the 2018 midterms.
“This year, we had a total of 3,588 ballots cast, for a voter turnout of around 48.36%; in 2018, there were 3,998 ballots cast, and a voter turnout of 54.71%. As with the 2018 election, this is one of our biggest turnouts for a midterm election, and a very good turnout,” said Peterson.
Peterson added that everything went smoothly at the polls throughout Montgomery County.
“We had no machine troubles, or anything of that nature. Everything came back, and uploaded, and calculated, so we’re very happy about that,” commented Peterson.
The supervisors were tasked with appointing write in candidates for the Pilot Grove Township Trustee, Pilot Grove Township Trustee to fill a vacancy, and Pilot Grove Township Clerk, due to no candidates on the ballot. In each of those races, Peterson said there was more than one candidate written-in, and the write-in candidates received an equal number of write-in votes.
The supervisors drew names for each position. Nicholas Michael was selected for Pilot Grove Township Trustee, Ross Oakleaf for Pilot Grove Township Trustee to fill a two-year vacancy, and Kathy Kloewer was drawn for Pilot Grove Township Clerk. However, Peterson said there was no guarantee the selections would accept the positions.
“These individuals wlll be declared the winners. However, if they decline, it will come back to the supervisors and you will have to find someone to appoint. There will be a letter sent to them that states they were written in, and that they were drawn at the canvass. They will then be given information, per code, what their option is, and they will have a certain number of days to decline the position, and then they will have to let us know in writing so we can bring it back to the table for appointment, if needed,” advised Peterson.
Peterson also said the county’s absentee precinct was selected by the Iowa State Auditor’s office for auditing. The audit ran smoothly.
“We had to do 50% of the ballots cast, and there were 856 ballots. We ended up doing 509, so we were over our 50%, and we had to hand-count the results so we could match. There were two ballots that they felt could go either way on the way they were marked, because the way they filled in their target was pretty messy,” Peterson explained. “The team felt like they wanted to count it, but according to the machine, it was not counted. That sort of highlighted the difference between hand-counting individually, and machine counting. “
Peterson also said the absentee board was reconvened to count five provisional ballots received.
“The ballots were opened and they were accepted, they were legitimate provisional ballots, and they were added in to the totals,” stated Peterson.
Poll watchers were not present at every precinct, but Peterson said they were present at some of the county’s locations while polls were open.
The 2022 midterms also marked the first county election for newly-elected county auditor Jill Ozuna, who won her unopposed election for the position. Ozuna said she appreciated the experienced help she had.
“It was eye-opening, humbling, and exhausting. I am so proud of the team we have here, and the poll workers, and the hard work they all do. They are top-notch at what they do. It was tough, but exciting, and I can’t wait for the next election. Beth Peterson runs her show, and does an excellent job,” Ozuna said.